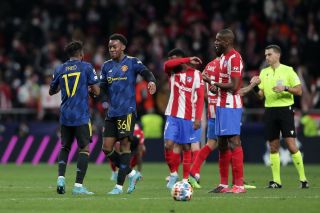 Manchester United will be looking to beat Atletico Madrid tonight in order to reach the Champions League quarter-finals.

Ralf Rangnick’s side are bidding to reach the last eight after a 1-1 draw in Madrid three weeks ago. The German will be hoping that Cristiano Ronaldo can continue his goalscoring form after a hat-trick against Tottenham Hotspur at the weekend.

David de Gea will start between the sticks, with Diogo Dalot and Alex Telles operate in their preferred full-back roles. Raphael Varane will be partnered by Harry Maguire at centre-back.

In midfield we see Scott McTominay and Bruno Fernandes return alongside Fred.

Anthony Elanga gets a start after scoring in the reverse leg and he will be joined in a front three by Cristiano Ronaldo and Jadon Sancho.