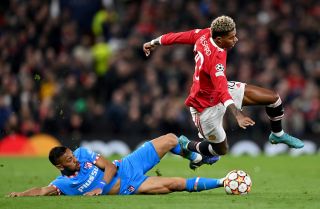 Hosting Diego Simeone’s La Liga champions, the Red Devils, led by interim boss Ralf Rangnick, knew that following a 1-1 first-leg draw, they needed to win on home soil if they were to progress to the competition’s quarter-finals.

It wasn’t to be though.

Full-back Renan Lodi opened the game’s scoring in the first half and United failed to claw their way back into the contest.

Although introducing several substitutes in the game’s second-half, Rangnick, who was left with no choice but to put all his attackers on the pitch, failed to see his side produce much in front of goal.

One player who came on in place of starter and first-leg hero Anthony Elanga was Rashford.

Unable to turn his side’s fortunes around, the England international has once again come under fire following what was another disappointing cameo.

Waddle, who spoke to BBC Sport, said: “Marcus Rashford looked absolutely terrible when he came on.

“Why do they keep playing him when he doesn’t want to be there, supposedly?”

Rashford’s long-term future has been questioned after a recent report from leading football transfer expert Fabrizio Romano claimed the United number 10 was ‘considering’ leaving the club.

Marcus Rashford is considering his future. He’s concerned about his lack of game time, source close to Man Utd forward tell me – he’s always been professional but he wants clarity. 🔴🏴󠁧󠁢󠁥󠁮󠁧󠁿 #MUFC

Where do you see Rashford going from here? – Let us know in the comments.