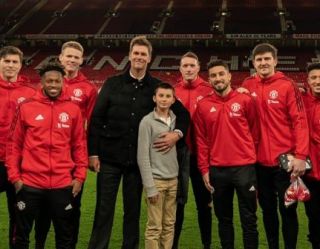 It was confirmed on Sunday that he would be re-joining the Tampa Bay Buccaneers, just six weeks after announcing he was hanging up the boots.

These past two months I’ve realized my place is still on the field and not in the stands. That time will come. But it’s not now. I love my teammates, and I love my supportive family. They make it all possible. I’m coming back for my 23rd season in Tampa. Unfinished business LFG pic.twitter.com/U0yhRKVKVm

But in a stunning u-turn, presumably influenced after watching Cristiano Ronaldo’s incredible hat-trick on Sunday, it sounds like Brady wants another Super Bowl ring despite collecting seven already.

The quarterback was in attendance at Old Trafford on Saturday and he took time to thank everyone, even the Glazers, for making the weekend trip to Manchester possible.

Brady tweeted: “Thanks to @ManUtd and the Glazer family for hosting me and my boys yesterday. So lucky to be able to share experiences like this with them.”

Thanks to @ManUtd and the Glazer family for hosting me and my boys yesterday. So lucky to be able to share experiences like this with them. pic.twitter.com/GDofXNZpfW

A Glazers suck-up, brown-nosing his way through social media.

I wonder if the American family warmed their NFL star about some of the chants he may have heard sung about their late father? Or do they gloss everything up in front of their employees?

He obviously plays for the Bucs but can you imagine one of the United players posted a positive message about the Glazers on social media? I, for one, would want whoever is responsible shown the door immediately.