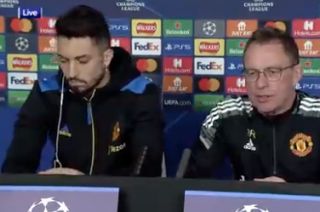 Manchester United are already one of Europe’s top clubs – but the team and performance levels is a million miles off the pace.

The biggest reason for that is the Glazer family only see the club as their commercial cash cow. They’re interested in running the biggest brand in world football rather than the best football team.

It’s a sad reality for fans but, with a bit of hope, we might see Ralf Rangnick have a greater influence on the running of things in the future because when it comes to recruitment we’ve made some shocking decisions down the years.

Rangnick’s job now is to get the best results possible on the pitch between now and the end of the season.

By trade this is not a football manager, but someone who can build football clubs.

He said: “We have a fantastic opportunity to be in the top 8 teams in Europe.”

🗣 "We have a fantastic opportunity to be in the top 8 teams of Europe."