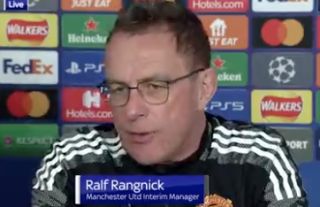 Manchester United have a big night in the Champions League at Old Trafford on Tuesday and it’s crucial that the fans do their part.

After drawing the first leg 1-1 at the Wanda Mentropolitano, United know a positive result will see them reach the quarter-finals of the competition. That will be Ralf Rangnick’s ultimate aim this week because his team have 18 days without a game after tomorrow night’s round-of-16 clash.

Respected journalist and fanzine editor, Andy Mitten, asked the manager about the atmosphere at Old Trafford ahead of the match, and how important it is that the fans get behind the team to make Old Trafford a fortress.

“They can be not only our 12th but our 13th player on the pitch,” Rangnick answered.

Ralf Rangnick stresses the importance of the fans in the upcoming Man United games pic.twitter.com/VeC4Sv8F54

Rangnick went on to speak about the important role fans play on nights like these in the Champions League.

Manchester United know what a big night in Europe is like, but we have not enjoyed the Champions League so much in recent years. Atletico Madrid have consistently competed at this level under Diego Simeone, so it’s important to note that we’ll be up against it from the start.

Just like we were in Madrid when the United fans sung Anthony Elanga’s name late into the night.

We hope to be singing at full-time, but it’s crucial to get behind the lads throughout the game.