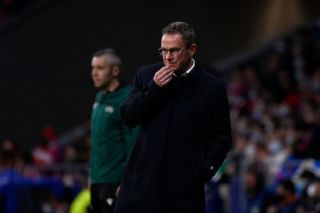 Manchester United will be looking to book their place in the quarter finals of the Champions League when they take on Atletico Madrid at Old Trafford on Tuesday night.

The Reds go into game against Atletico all square at 1-1 knowing that victory over Diego Simeone’s men would be enough to put the Reds into the quarter finals.

Cristiano Ronaldo is widely expected to lead the Reds attack after a sensational hat-trick against Tottenham at the weekend, whilst Bruno Fernandes could also be set to return.

Victory over Tottenham couldn’t come at a better time for United. Having been heavily beaten in the derby at the Etihad, United could not afford to drop more points and by beating Spurs on Saturday it has given the club a much needed lift going into the Atletico Madrid clash.

One man who stole the show against Spurs was Ronaldo. The Portuguese had endured a below par couple of weeks certainly by his standards but he showed what a magnificent player he still is. Ronaldo has a fabulous record against Atletico and you wouldn’t back against him scoring a few more on Tuesday night.

Facing Atletico arguably presents United’s biggest game of the season so far. The European Cup is the only chance the club have of winning any silverware this season although it may be a tough ask you still wouldn’t put it past United to go all the way.

Much like Liverpool, Chelsea and Porto in the past you don’t necessarily have to be the best team in the competition to actually win it. It’s a knockout competition and anything can happen and if United can get past Atletico and get a favourable draw in the next round then there would be growing belief that United can actually make this a season one to remember and win the European Cup.

It wont be easy and I suspect it will be tight but I really do fancy to get the win here and progress to the quarter finals.