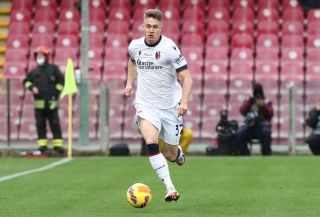 Last week there were reports that United had a scout watch Lyon vs FC Porto in the Europa League to keep an eye on French striker Moussa Dembele.

Now we are hearing that two other apparent transfer targets were scouted on Sunday when Fiorentina beat Bologna 1-0 in Serie A.

According to Calcio Mercato, Fiorentina defender Nikola Milenkovic and Bologna midfielder Mattias Svanberg were both watched closely by United officials.

The reports states that Svanberg caught the eye of Ralf Rangnick during his days at RB Leipzig, but we know that Milenkovic was linked to United when Jose Mourinho was in charge.

United are in the market for a new centre-back and defensive midfielder.

Svanberg is a Sweden international with a £13.5m valuation (via Transfermarkt), so he would be a lot cheaper than West Ham’s Declan Rice. The question is whether he’s the real deal or not?

United can’t penny pinch like the Glazers would like, and they can’t just throw money at a problem either. Our recruitment needs to a plan and a sense of direction.

Let us know in the comments section if you would like United to sign Milenkovic and Svanberg in the summer?