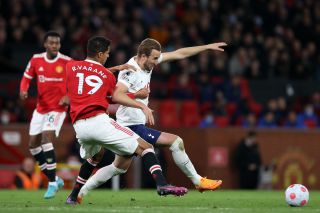 It looks like Manchester United could make a move for Harry Kane this summer.

With the news that Manchester City have moved into pole position to sign Europe’s most wanted striker, Erling Haaland, as per the Daily Mail, Manchester United will need to find another solution to their problems in front of goal.

Cristiano Ronaldo, 37, has one year left on his contract but he cannot be expected to play every game next season. Our number 7 scored a hat-trick against Tottenham Hotspur on Saturday and he will quickly turn his attention to knocking Atletico Madrid out of the Champions League.

The fact United are being heavily linked with Mauricio Pochettino will feed the Kane narrative for now, but The Mirror claims the have actually reignited interest in the striker.

Tottenham’s star player was subject to a failed transfer bid from City last season and it’s highly doubtful that Pep Guardiola will want to sign Haaland and Kane, after signing Julian Alvarez in January.

Kane has rediscovered his best form under Antonio Conte in recent weeks, and at 28 he will want to move somewhere he can win trophies. United can’t guarantee that at the moment but there’s no doubt that we are massively underachieving on the pitch.

We need a new manager to come in and build something special over the coming years.

It is worth noting that the England captain has a poor injury record and he won’t come cheap. The report suggests it could take more than £100m to land Kane, but there has also been links with Bayern Munich goalscorer Robert Lewandowski.

We must be wary about the Poland international, however, knowing that a number of Bayern Munich players have used United’s name to get bigger and better deals at the Bundesliga club.

United take on Atletico Madrid in the Champions League tomorrow night and will be looking for more goals from Cristiano Ronaldo to make it another night to remember in Europe with the Portuguese superstar.