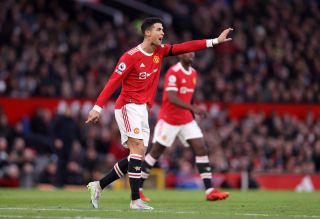 The Portuguese star, 37, scored a superb hat-trick against Tottenham on Saturday when Manchester United won 3-2 at Old Trafford.

Roy Keane felt Ronaldo looked angry on the pitch, almost like a player trying to make a statement to dismiss untruths, and there was some joking in the Sky Sports studio about how he spent last weekend in Portugal rather than Manchester while his teammates got hammered 4-1 in the derby.

It was deemed controversial that Ronaldo missed last week’s clash with Manchester City due to a hip injury, a claim that not too many were sold on and Ralf Rangnick admitted after the game against Spurs that managing CR7 can be challenging at times.

Anyhow, at least Chadwick believes Ronaldo looked sharper after his time off. He thinks the Portuguese sensational is going to be a massive part in United’s push for a top four finish.

“It was a good game, both teams had their chances, that’s for sure, but the difference between the two teams was obviously Cristiano Ronaldo,” Chadwick told CaughtOffside.

“It was a masterclass from him really, the first goal from a long range shot, then a tap-in, and then an incredible header to win the game. We’ve been waiting for Cristiano Ronaldo to do something special like that this season, he’s not been firing on all cylinders in recent weeks especially.

“Without him I’m not sure United would even have got a point, let alone all three. It wasn’t a brilliant team performance, but a good game, and the difference between the two teams was the great man.

“He looks like he’s still in a similar shape to five or six years ago. He’s not been as consistent this season, but then he’s not been playing in a high-performing team week in, week out.

“He wants to be on the pitch every second because he wants to break all the records and keep scoring more and more goals. He did look a bit sharper, though, after that longer rest.

“Still, the position United are in, if he’s fit it’s hard to leave him out because there’s not really anyone else in that squad who can offer the goal threat he does, or do what he did on Saturday in that position.

“It’s a tough one, every time you see him play, you want to see him at his best, so it’s down to the club to work out how to manage him. If you leave him out and the team don’t get a result, it’s certainly going to be difficult for them to get into the top four.

“Arsenal are now in an incredibly strong position and United really need to win all their games to have any chance of getting into that top four, so you’d imagine Ronaldo is going to be a massive part of that.”

All of this shows how reliant we are on a 37-year-old.

I don’t believe Ronaldo was signed in the summer to start every game, but he is now in a position where he needs to and I’ve no doubt he would rather it be that way than sitting on the bench.

Only Ronaldo gets to decide whether it’s a day for the bench or a beach somewhere in Portugal.