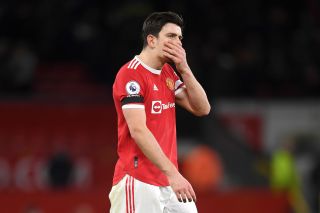 The 29-year-old has struggled all season after an impressive Euro 2020 campaign with England. Maguire played a key role in the Three Lions reaching in the final, only for Gareth Southgate’s side to fall at the final hurdle against Italy.

However, Maguire endured another difficult evening in a United shirt on Saturday when he put the ball past David de Gea into his own net. United still went on to beat Tottenham 3-2 thanks to Cristiano Ronaldo.

Maguire’s defending was again discussed after the match, with former Hull City teammate Elmohamady giving his opinion that the centre-back should no longer be club captain.

“Harry was with me in Hull City and, in my opinion, he doesn’t have the level to be the Manchester United captain,” he told beIN Sports, as per the Manchester Evening News. “Manchester United need a player with a strong personality and I hope that the next manager will give the captaincy to Ronaldo, if he stays.

“So I think that the pressure he has by wearing the captain’s armband is affecting his performances. Maguire performed really well with Leicester, a team that competes to be in the top six of the Premier League, and maybe this is his level. He doesn’t have the level to play for the biggest team in the history of England.”

The comments from Elmohamady are brutal – but at least he is giving some honesty rather than how John O’Shea cast his opinion on Maguire, which was pretty watered down.

He has become one of the biggest problems in the team this season and it doesn’t help that Ralf Rangnick – and many others – want a higher defensive line because that doesn’t cater for Maguire’s best attributes.

We are no longer a team that sits back on the counter-attack and, on top of that, Maguire will probably admit that this has been one of the toughest spells of his career.