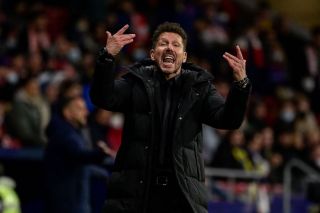 The La Liga champions visit Old Trafford to compete for a place in the Champions League quarter finals, with the scoreline currently 1-1 following their meeting in Madrid last month.

Anthony Elanga came off the bench to score a second half equaliser at the Wanda Metropolitano. We’re just hoping that it’s a United player in the headlines for the right reasons on Wednesday morning.

Simeone set up with a 3-5-2 formation in the first leg and he has some doubts going into the tie after naming his 23-man squad.

“Because of their characteristics in midfield, and ours in that area, it will be a dynamic game,” Simeone told reporters at his pre-match press conference, as per Marca.

“There will be high pressure from them at the start and we will try to take advantage of the counter attack.”

In our predicted Manchester United XI, we opted for a midfield trio of Fred, Scott McTominay and Bruno Fernandes.

Let us know in the comments if you think United have what it takes to win the midfield battle against Atletico Madrid? We didn’t win it in the first leg.