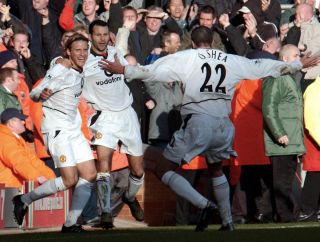 He came from Uruguay, he made the Scousers cry!

Diego Forlan is set to return to Old Trafford after Manchester United confirmed the first part of their squad for a charity match against Liverpool.

In a bid to raise funds for the Manchester United Foundation, a number of former players will be lining up to take on Liverpool in May, with the fixture promising countless famous faces.

Bryan Robson will be in the dugout as manager, stood alongside Andy Cole, but this is only the start of the announcements with more expected to follow in due course.

Two decades on from his arrival at the club, Forlan will make his grand return against a side he enjoyed one of his greatest moments against.

The Uruguayan scored two quick-fire goals in a 2-1 win over Liverpool during the 2002/2003 season.

United fans have sung about Forlan making the Scousers cry ever since that game.

However, Forlan scored only 17 goals in 97 appearances for United before enjoying more success in Spain with Villarreal and Atletico Madrid.

Speaking to club media (via ManUtd.com), Forlan said: “I have said for a long time that I need to return to Old Trafford, but I didn’t think it would be as a player. It will be an honour to step back out on to the pitch and see the fans again who have continued to chant my name for all these years.

“It will be a great opportunity for me and for everyone involved, especially to play against our old rivals Liverpool, but also to raise money for the children of Greater Manchester.”

Stay tuned for more updates on who will be involved in the legends friendly match against Liverpool, though it goes without saying that there is nothing friendly about a football match with the Scousers.