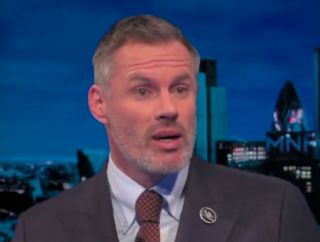 Jamie Carragher annoyed a lot of Chelsea fans when he suggested Manchester United should try to appoint Thomas Tuchel in the summer.

The former Liverpool defender wrote in his Telegraph column that if the German coach gets the opportunity to leave Chelsea for United, he should take it. It was a suggestion that added Tuchel to a two-man list of candidates — Mauricio Pochettino and Erik ten Hag – for the job at Old Trafford.

On Monday Night Football, Carragher reiterated his opinion by claiming since Roman Abramovich arrived at Chelsea in 2003, the London club have been taking advantage of other sides because of their financial strength.

Remember how they stripped the FC Porto side that won the Champions League along with their manager at the time, Jose Mourinho, before going on to financially outmuscle other English sides in their quest for success?

Chelsea find themselves in a terrible situation right now with lots of uncertainty about the future following sanctions on their current owner. Although, a Saudi Arabian consortium has reportedly made a bid worth £2.7bn for Chelsea today, as per Ben Jacobs.

I can confirm Saudi Media Group have made a £2.7bn ($3.5bn) offer to buy Chelsea. Mohamed Alkhereiji is a Chelsea fan and leading a private consortium. No direct government links.

Carragher is spot on and Chelsea fans would be naïve to think other clubs wouldn’t take advantage of their current state.

🗣 "It's a little bit hypocritical of Chelsea supporters."@Carra23 discusses the recent backlash he has received over comments he made at Stamford Bridge, urging #MUFC to try and bring Thomas Tuchel to Old Trafford following sanctions placed on Chelsea. pic.twitter.com/XM7qIrlIeK