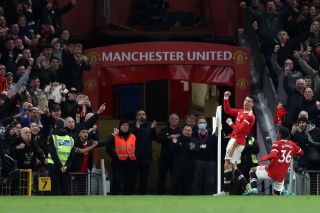 The latest Premier League team of the week has landed and Manchester United’s hat-trick hero Cristiano Ronaldo lead the line.

The Portuguese superstar scored his second ever hat-trick for United — 14 years apart — in an important 3-2 win over Tottenham on Saturday, so Garth Crooks was bound to give Ronaldo a place in the team this week, as per BBC Sport.

Crooks wrote: “Just when you think Spurs are making progress something comes along to convince you it was all smoke and mirrors. The person this time to shatter all Tottenham’s illusions that they might be a top-four side was Cristiano Ronaldo. The Portuguese superstar was in blistering form against Spurs at Old Trafford. Ronaldo was left out of the starting line-up against Manchester City with a suspected hip injury. It was just as well because he was looking jaded and seems to have benefited from the rest. Here is someone who still wants to play every week but as an outfield player and especially as a striker aged 37, someone should tell him that even he should give way to youth occasionally.”

Ronaldo is joined in attack by Liverpool’s Luis Diaz, who has been a big hit since arriving in the Premier League, as well as Brentford’s Ivan Toney.

The team lacks a defensive midfielder and Fred may feel unlucky to miss out after his display against Spurs. The midfield four is made up of Andriy Yarmolenko, Martin Odegaard, Christian Eriksen and Raphinha.

Crooks also went with a back three of Joel Matip, Conor Coady and Antonio Rudiger.

Chelsea Rudiger has been linked with a move to United in recent weeks and he was brilliant again at the weekend when Chelsea beat Newcastle United 1-0 at Stamford Bridge.