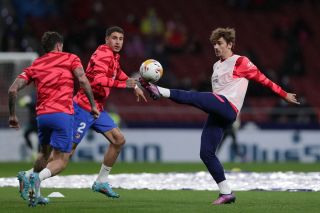 Atletico Madrid will be the visitors at Old Trafford on Tuesday night when Manchester United plan to book their place in the Champions League quarter-finals. The first leg of the last-16 clash was held at the Wanda Metropolitano a fortnight ago and it finished 1-1 so there’s everything to play for.

Both teams go into the game on the back of a successful weekend, too, which hasn’t always been the case this season. Atleti may be the reigning La Liga champions but they are a far cry away from retaining that title this season.

At least they beat Cadiz 2-1 at the weekend thanks to goals from Joao Felix and Rordrigo de Paul.

United also picked up three points in the Premier League — beating Tottenham 3-2 after a hat-trick from Cristiano Ronaldo, who loves scoring against Atletico Madrid.

However, Atleti have announced a 23-man squad to fly to England for the tie.

We can only presume that these three players will be touch-and-go until Diego Simeone names his team to take on United.