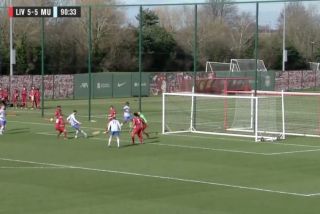 Manchester United’s U18s showed real spirit to fight back to claim a point after being 4-1 down.

Liverpool went two goals ahead early on but Ethan Ennis, who joined United from the Scousers in the summer, halved the deficit before the half-time whistle.

Things got worse for the young United side as Liverpool restored their two-goal lead before then going 4-1 up.

It began to look like one of those days you’d rather forget about, but the Reds started their comeback as Willy Kambwala found the back of the net with a back-post header.

Joe Hugill scored a minute later but Liverpool appeared to find a winner at 5-3. That was before Ennis and Hugill doubled their tallies for the day to make it 5-5.

Hugill’s stoppage-time equaliser is worth watching back as he taps home from Kobbie Mainoo’s pullback.

With the youths after reaching the FA Youth Cup final and coming back from a 4-1 deficit, we’ve got an exciting bunch of young players coming through at United.

A lot to be excited about!