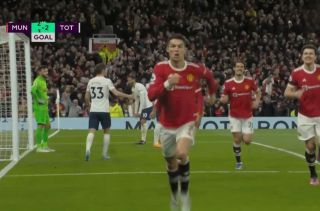 Fuelled by his doubters.

The technique and power from Cristiano Ronaldo’s header was sensational to make it 3-2.

But the problem with this Manchester United side is that we are so vulnerable at the back, but Ronaldo has got the stadium bouncing and we should be able to hold onto the lead with three centre-backs on the pitch.

Ronaldo was substituted after scoring his third goal of the game against Tottenham, with Victor Lindelof coming on to help keep the one-goal lead until the end.

The goal came from a corner with Ronaldo doing his utmost to win the ball inside the box. He not only does that but guides the ball into the back of the net to score his first hat-trick since returning to the club.

Just what we needed after Harry Maguire’s own goal!

The goal will also come as a sucker punch to Tottenham who have already equalised twice in the match, but could still go home without a single point.

That would be enough to say goodbye to their top four hopes.