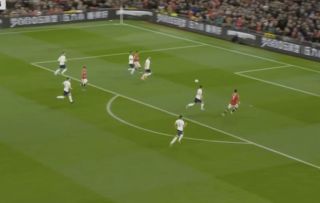 Manchester United have regained their earlier lead against Tottenham Hotspur thanks to star man Cristiano Ronaldo.

The Red Devils went in front earlier in the first half of Saturday’s important Premier League tie against Antonio Conte’s Lilywhites.

Cristiano Ronaldo popped up 35 yards out from Hugo Lloris’ goal and fired in a brilliant effort that carried with it vibes from his famous Champions League goal against Porto back in 2008.

However, after seeing full-back Alex Telles conceded a lazy penalty kick, which Harry Kane emphatically converted, Ronaldo has once again come to his side’s rescue.

He taps in Sancho’s cross to restore #MUFC‘s lead! pic.twitter.com/rzNKh1FRXz