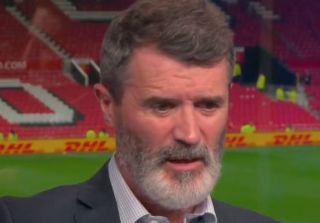 Cristiano Ronaldo had fire in his belly to guide Manchester United to a valuable 3-2 win over Tottenham on Saturday.

United did not disappoint as Ronaldo returned to the starting line-up to score his first hat-trick since returning to the club, to play a huge hand in our win over Tottenham.

Roy Keane felt Ronaldo looked an angry player on the pitch this evening, like he had something to prove.

"Ronaldo looked angry today… he's been upset with something" 😤

The former United captain also argued that United should keep Ronaldo because they’re better with him than without, which is a very good point. It was a good job we signed him and weren’t reliant on Edinson Cavani to play up front this season.

Why was Ronaldo angry?

It could be the constant criticism he gets from pundits in the game, saying he’s a problem in a United side that has been glittered with problems for years.

He quickly silenced his critics against Tottenham.

Ronaldo’s opening goal was struck home superbly from 25 yards and he added another after Harry Kane had levelled from the spot.

Ronaldo’s winner came from a header with under 10 minutes left on the clock.

Let us know in the comments section if you think the wheels have come off for Tottenham?