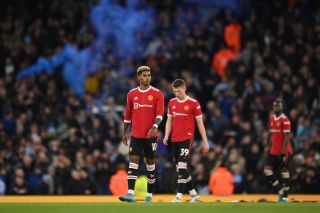 Ralf Rangnick has made his position very clear on the latest rumours surrounding Marcus Rashford’s future at Manchester United.

Speaking at a recent press conferrence, cited by BBC Sport, Rangnick said: “He didn’t say anything to me. He said to me that he’s still happy and that he wants to perform on a high level here for the club. He didn’t mention a thing about not being happy here.”

The interim manager, who is expected to move into an advisory role at the end of the season, does not seem to be letting media talk get to him while he attempts to finish the season strongly.

Rangnick thinks that spending time discussing speculation would be counter-productive and he’s got a point when you consider the job at hand in order to qualify for the Champions League next season.

“It doesn’t make sense to put energy into that,” added Rangnick. “I don’t think this is an issue and he never said anything about that when we spoke.

“The window is closed right now. Even in case he and his agents or his family think about going to another club, well he can do that but in the summer.”

Rashford has lost his place in the team in recent weeks after Anthony Elanga burst onto the scene. He is struggling for form but needs to find a way to get back on track because having the England international back to his best would be a huge boost to United.

The 24-year-old has been involved in 14 of the 18 games Rangnick has been in charge for, starring eight of those.

And it doesn’t sound like Rangnick is giving up on Rashford anytime soon.

He concluded: “I like Marcus as a player. I’ve had a few in the past at former clubs where they had problems at one stage but it’s our job to help him, to get the best Marcus Rashford that he can be.”