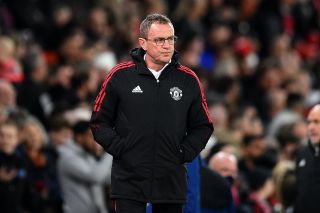 Manchester United will be forced to try and beat Tottenham Hotspur without the help of midfielder Bruno Fernandes.

The Portuguese playmaker will not feature against Antonio Conte’s Lilywhites on Saturday after interim boss Ralf Rangnick opted to field a midfield three of Fred, Nemanja Matic and Paul Pogba.

However, while fans will be pleased to see the likes of Rashford given a chance to reignite his poor form, much of the pre-match talk will be dominated by Fernandes’ exclusion.

Speaking to the club’s official website, Rangnick explained why the Portugal international will not feature this weekend.

“Bruno is ill, unfortunately,” Rangnick said before the game. “He couldn’t train yesterday and is therefore not available for the game. Hopefully, he will be back for Tuesday but, today, he is out.”

Although the extent of his illness is not yet fully known, as Rangnick rightfully pointed out, fans will certainly be hoping the 28-year-old can return for his side’s important second leg Champions League knockout tie against Atletico Madrid on Tuesday.