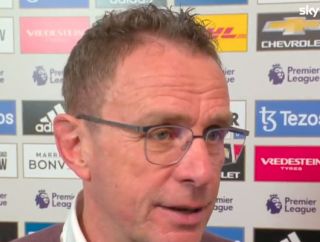 Ralf Rangnick believes Cristiano Ronaldo put in his best performance since the German coach arrived at the club in December, but he admitted that ‘it is a challenge’ to manage the five-time Ballon d’Or winner.

The Portuguese star stunned Tottenham Hotspur with a hat-trick in today’s 3-2 win. Antonio Conte’s side were not able to control Ronaldo who hit them with a goal from distance, a tap-in and a header.

“Since I arrived it’s been Cristiano Ronaldo’s best performance,” Rangnick told Sky Sports after the match.

"Since I arrived it's been Cristiano Ronaldo's best performance" 💯

Rangnick was happy with Ronaldo’s energy and how he got back to help the team defend at times. He said he expected Ronaldo to score – but not three goals!

Rangnick went on to make a surprise claim about the Portuguese star.

“It’s a challenge with a player like him,” he said. “But he showed today that he still has the quality to play for a club like Manchester United. He also has the quality to be part of the team, and if we want to be successful at the end of the season that’s what we need.”

The manager added that he got the reaction he wanted from the team after losing to Manchester City last weekend.

It was the angry performance he spoke about prior to kick-off.

There are still areas that Rangnick wants the team to improve, but he explains that it wasn’t easy without Bruno Fernandes and Scott McTominay.