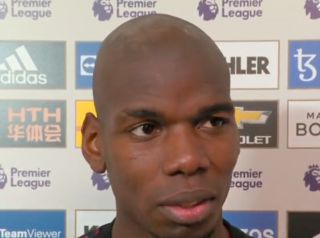 “That’s what we needed. A reaction.”

Paul Pogba was happy with today’s 3-2 win over Tottenham Hotspur.

He was in a much better mood than last week, when United fell to their rivals in a 4-1 defeat at the Etihad, as we all left the council house with egg on our face.

Our players’ mentality is switching on and off and that must change if we are to finish in the top four this season.

"Beautiful reaction… the mentality was there today" 💪🔴

The Frenchman urges his teammates to learn from the mistakes they made against Spurs. Hopefully they can cut them in time for Tuesday night’s game against Atletico Madrid in the Champions League.

Pogba said they needed the win today, which we said in all of our pre-match content, and that it was a boost. He set out his aims for the team to finish in the top four this season.

But first I hope we make it a week to remember on Tuesday night.