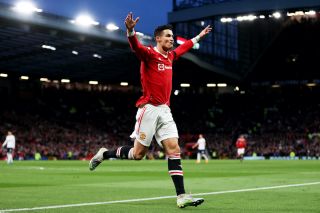 Manchester United hosted Tottenham Hotspur and got what they needed. The lads secured three points after beating today’s opponents 3-2 at Old Trafford.

Here’s how we rated each starting player on their performance.

No goalkeeper in the world was stopping Harry Kane’s penalty but other than that, the Spaniard had a surprisingly quiet game in terms of having to make saves. There was very little he could’ve done with Maguire’s own goal.

Made an important clearance off the line from Eric Dier in the first half. Kept getting dragged inside.

Shocker own goal to concede but wasn’t helped by Dalot.

Conceded the penalty in the first-half. A pretty average display throughout.

Steady head in the middle and go us moving for Ronaldo’s second goal.

Nice flick to assist Ronaldo’s opener. Provided lots of energy throughout the game and broke into Tottenham’s half on more than one occasion in the second-half.

Hot and cold throughout. Went missing in phases of the game.

Poor defending before the penalty was given in the first half, but made amends with an assist for Ronaldo before half-time.

Ran a lot but offered nothing on the ball. Hauled off with 30 minutes to play for Anthony Elanga.

The hero of the day scored his first hat-trick since returning to the club. It won us the game.