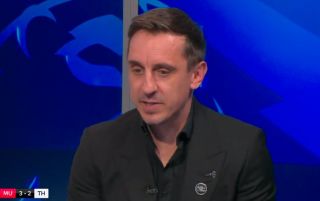 Gary Neville was critical of Manchester United’s performance in his post match assessment.

Manchester United managed to beat Tottenham Hotspur 3-2 in a must win fixture, but it wasn’t enough to satisfy Neville, who rightly appeared appalled by United’s lack on bite and togetherness on the pitch this evening.

Neville spoke about Ronaldo’s sensational hat-trick but how poorly it looked as a team.

“They’re not very good,” Neville said on Sky Sports after the match.

🗣 "They're not very good!"@GNev2 feels Man Utd did not produce a great performance despite their win over Spurs ❌ pic.twitter.com/4QB5j3zblD

For starters, we agree for the most part that Ralf Rangnick’s side were far from good. They blew hot and cold throughout the match and both teams played without much quality.

I have seen weaker teams come to Old Trafford this season and cause more problems than Tottenham — and, like I said, it wasn’t because we were good.

What does this say about Tottenham? We’ve done the double over them this season.