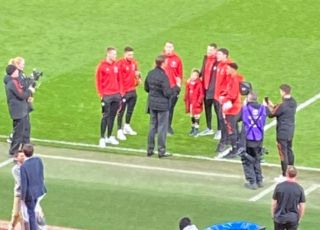 With Tom Brady in attendance for today’s 3-2 win over Tottenham Hotspur, it only made sense for the NFL legend to meet the Manchester United squad after the full-time whistle.

Last month, Brady retired from the NFL after 22 seasons – 20 which he spent at the New England Patriots winning six Super Bowl rings, before joining the Tampa Bay Buccaneers and delivering Super Bowl glory in his first season.

I think it’s safe to say Brady is considered the greatest player in NFL history, even if it’s coming from someone who only watches a few American football matches every year.

The United squad will be happy with their win but they would have also enjoyed the few minutes they spent with Brady afterwards.

Not every United player is pictured, though.

United players have come back out on the pitch to meet Tom Brady. #muntot pic.twitter.com/y6sm6D2j5e

I hope Brady can give a few words of encouragement ahead of the big game on Tuesday night in the Champions League.

Tottenham striker, Harry Kane, is another big NFL fan so I’m sure he will be sticking around to get a photo with Brady.