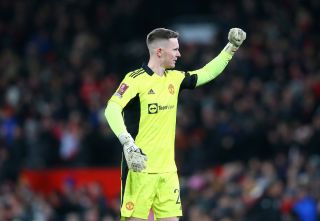 Dean Henderson is set to start for Manchester United in today’s game against Tottenham at Old Trafford.

According to the Manchester Evening News, David de Gea has tested positive for COVID-19 and Henderson, who turns 25 today, is expected to be named on the team sheet to face Spurs later today.

It will be Henderson’s first Premier League appearance since the final day of last season at Wolves, and he’s only made three appearances this season which must come with some disappointment.

De Gea has been first choice — starting in all 28 of United’s league matches so far this season — but after testing positive for coronavirus, there’s a very good chance he will miss the second leg against Atletico Madrid in the Champions League.

This is not good news for United, but Henderson is a quality keeper and he more than deserves his chance between the sticks. The academy graduate was in the frame to become first choice last year, until he contracted COVID-19 at the beginning of the campaign.

United have an 18-day break from matches after they take on Atletico Madrid next week, so De Gea is not expected to miss more than two matches.