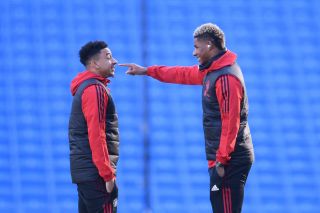 Marcus Rashford is getting it from all corners.

There has been uncertainty over the forward’s future since Fabrizio Romano reported last week that the Manchester United star was considering his future.

After Ralf Rangnick played down claims Rashford is unhappy at the club, Gary Neville took to Twitter to give his reaction, saying: “Rashford – 1. A failure for United’s football department if he leaves.

“2. A very poor look for MR if he can’t get his form right to break into this team. 3. MR/Team would be naive if they think his off-pitch voice will carry without the MU badge.

Some fans were irked by this – insisting that Rashford’s incredible charity work shouldn’t be linked to his role at United. Neville took some time to reply, adding: “It’s just a proven fact if you play for United you will gain more traction and reach with your voice. This isn’t just for Rashford. It’s for all of us that played for the club.”

It’s just a proven fact if you play for United you will gain more traction and reach with your voice. This isn’t just for Rashford. It’s for all of us that played for the club. https://t.co/CPxjei8uc2

Rashford has a contract at United until 2023, and the club has the option to extend it by a further year if they want to, so there’s no need to panic right now.

I reckon there will be talks held after the next manager is appointed and Rashford will want to know if he is part of his long-term plans.

Ultimately everyone loses if Rashford leaves United but he will be the one to suffer the most.

Let us know in the comments section if you think Rashford should be sold in the summer?