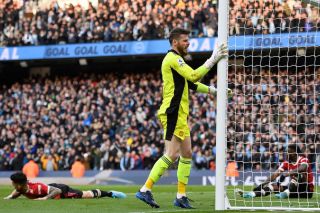 Earlier this morning it looked like Dean Henderson was set to make his first Premier League start of the season against Tottenham Hotspur later today because it was reported that David de Gea had tested positive for COVID-19.

This has led to a lot of confusion in the Manchester United camp because David de Gea is back in contention amid the uncertainty of a false positive COVID test result, as per the Manchester Evening News, which could rubbish their previous story about the goalkeeper situation.

This wasn’t how Henderson planned his 25th birthday — to be brought into the spotlight prematurely, only for De Gea to get the nod, but we as fans can only get behind the manager and his starting line-up against Spurs.

It is a must win game for United because a defeat could completely shoot our chances of finishing in the top four this season. We already need results to go in our favour elsewhere and Arsenal have three games in hand.

Tottenham are in the same position as us when it comes to top four and they need to win as well. Antonio Conte has been trying to prepare his players by asking them to answer his questions at Old Trafford.

Only time will tell who starts in goal, but if De Gea is feeling ill maybe it would be best for Henderson to play?