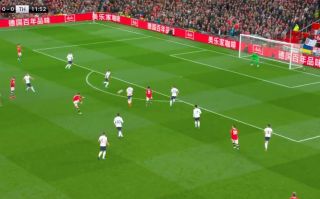 An explosion of brilliance from Cristiano Ronaldo.

It was almost like one of his brilliant free-kicks, without a wall standing in place, and it was an absolute beauty of a goal.

The game was being played at a safe pace up until the goal but now Manchester United have Tottenham Hotspur exactly where they want them, with a 1-0 lead after 13 minutes.

Manchester United’s iconic number 7 showed the back of his shirt to the fans at Old Trafford.

Fred got the assist with an incredible flick to Ronaldo, who drove the ball into the net from distance with a stunning strike.

Pick that one out! 🎯

Cristiano Ronaldo unleashes an absolute thunderbolt to give #MUFC the lead! ⚡ pic.twitter.com/3EEm3fjq0T

Hopefully the Reds can hang on and claim three points by adding another few goals before half-time.

The goal has definitely lifted the confidence on the pitch but Spurs are dangerous.