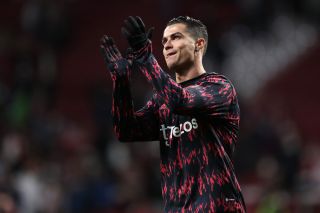 The Reds can’t afford anything less than a win today if they are to continue the fight for a top four spot.

Mikel Arteta’s Arsenal are already ahead of us in the table with three games in hand, so we already need results elsewhere to go in our favour.

David de Gea gets the nod despite claims this morning that he had tested positive for COVID-19.

Diogo Dalot and Alex Telles will play at full-back, while Harry Maguire is partnered by Raphael Varane in the heart of defence.

Nemanja Matic will sit deep in midfield. That should allow Paul Pogba and Fred work on quick transitions to the attacking trio, which won’t be feeding on Bruno Fernandes’ passes this evening.

Jadon Sancho and Marcus Rashford will operate down the flanks, with Cristiano Ronaldo seeking service in the middle.

One response to “Confirmed Manchester United XI vs Tottenham: No Bruno or McTominay, Ronaldo starts”