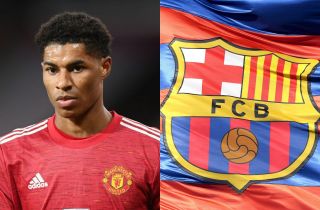 Barcelona are understood to be eyeing up a move for Marcus Rashford.

According to Spanish publication Sport, the La Liga giants are planning to sign a centre-forward the summer with Rashford being one of the players they are watching, after it was reported that he was considering his future.

It’s a strange one because I wouldn’t describe Rashford as a centre-forward or see him being an alliterative to Erling Haaland, which is also suggested in the report. The England star plays out wide for club and country and his style is very different to the Norwegian goalscorer, who the Daily Mail thinks is headed for Manchester City.

Sport reckon Rashford could cost up to €80m in the summer and Ralf Rangnick has already made his position known on the speculation, by saying it would be counter productive to discuss such unimportant matters right now.

This very much depends on what position Rashford takes in the summer when the new manager is appointed. He will want to know whether he’s part of the club’s long-term plans or not.

It’s an intriguing period for Rashford and we will get to see how he reacts to being challenge for his place in the team.

United take on Tottenham later today and there is no guarnatee anymore than Rashford will be starting.