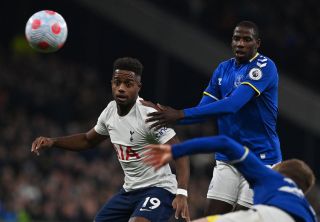 Antonio Conte has confirmed that Tottenham Hotspur wing-back Ryan Sessegnon will miss Saturday’s trip to Manchester United due to injury.

The 21-year-old was replaced by Sergio Reguilon at half-time in Monday night’s 5-0 win over Everton, after suffering a hamstring injury.

In his pre-match press conference ahead of the match, Tottenham manager Conte provided an update on the wing-back’s condition.

As quoted by the Daily Mail, Conte said: “Bad news about Ryan Sessegnon. He had a scan, a muscular problem, maybe we will see him after the international break.

“We are not talking about a new problem, we are talking about a situation that unfortunately is repeating. Not only in this season but also in the past. For sure we have to try with the medical department find a solution to help this player.”

This means that Spanish international Reguilon is likely to start against United on Saturday.

Tottenham will also be without Japhet Tanganga and Oliver Skipp for their trip to Old Trafford.

With back-to-back clean sheets in the Premier League, Conte’s side will have more confidence than the Reds who suffered a 4-1 hammering at the hands of Manchester City last weekend.

Ralf Rangnick needs a response from his players if they have any chance of finishing in the top four this season.