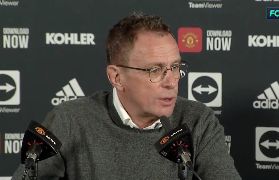 Chelsea owner Roman Abramovich was sanctioned by the UK Government on Thursday.

The news has led to lots of uncertainty around Chelsea Football Club, with manager Thomas Tuchel becoming a wildcard contender for the Manchester United job.

United interim boss Ralf Rangnick has pointed out that Chelsea are not the “only club” in the Premier League who have had Russian owners or shareholders in recent years after Abramovich was sanctioned by the government, amid Russia’s aggressive invasion of Ukraine.

🗣 "Nobody would've expected that to happen, therefore we should be very careful to blame somebody for doing this or that."

Ralf Rangnick on what's happening at Chelsea and how it affects the club pic.twitter.com/LfXd6aTg9d

It was put the football club in crisis mode.

Rangnick said: “Nobody would’ve expected that to happen, therefore we should be very careful to blame somebody for doing this or that.

He added: “Not only at Chelsea, [but] also at Arsenal and Everton there were ownership shares by Russian oligarchs.

“[Chelsea] was not the only club.”

Abramovich was sanctioned because he has had a close relationship with Russian president Vladimir Putin, although this is something the oligarch/businessman has always denied.

Rangnick raises a very valid point and it will be interesting to see if any other club in the top flight gets hit with sanctions in the coming weeks.