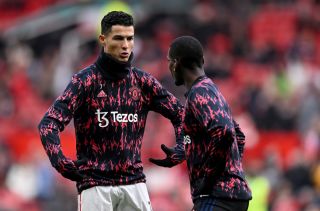 Cristiano Ronaldo could return for Manchester United in their Premier League clash against Tottenham on Saturday.

The Portugal star missed the 4-1 defeat to Manchester City last Sunday with a hip injury, but he resumed full training with the group on Thursday and is likely to train again today.

Luke Shaw is still unavailable because he keeps testing positive for COVID-19 and Scott McTominay is unlikely to be risked as he has a calf problem.

On top of that, Edinson Cavani could make an appearance on Saturday. The Uruguayan was passed fit a week ago but still managed to miss the Manchester derby.

“He [Ronaldo] resumed for training yesterday,” Rangnick said about Ronaldo, as per the Manchester Evening News. “He trained the whole training session and I expect him to train today as well. He trained well, like the rest of the group. I would’ve thought he was available tomorrow.

“Luke Shaw will still miss out. Until yesterday, he was still testing positive for Covid. Scotty is a question mark, he had some problems with his calf, so we have to wait and see until after training. Right now it’s more likely he will not be available because if we risk him tomorrow he will more likely be out for the game on Tuesday (against Atletico Madrid). With some muscular issues, more if it’s the calf, I tend to be careful.

United need to win on Sunday to keep their top four hopes alive and there has been rumours of uncertainty over Ronaldo’s future at the club. The 37-year-old has another year left on his deal and will be looking to finish the season strongly.

Rangnick was reluctant to address Ronaldo’s decision to fly to Portugal on his day off after he was deemed unfit for the derby, saying: “I haven’t asked him if he’s happy at Manchester or at this club,” Rangnick shrugged. “For me it’s important he’s fit again, he resumed training yesterday and we shall see which formation and which will line up we will play with tomorrow.