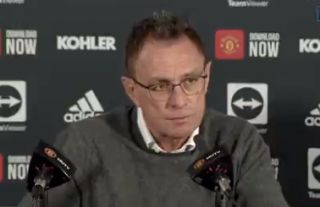 Cristiano Ronaldo missed the Manchester derby last week due to a hip injury.

According to the Mirror, our number 7 did not tell Manchester United that he would be travelling to Portugal on the weekend that the derby was taking place.

It is hard to see how Ronaldo would have prevented the 4-1 scoreline in Manchester City’s favour, although the fact he flew home to Portugal was always going to grab the headlines.

Interim manager Ralf Rangnick did not make it clear if he was happy or unhappy with Ronaldo’s decision, but he did break his silence over the controversial trip.

It has led to questions over whether Ronaldo is in decline or if he even wants to be at the club anymore?

“Well, I don’t know, I haven’t asked him if he happy at Manchester and at this club,” Rangnick told reporters this afternoon, as per the Manchester Evening News.

“For me, it’s important that he’s fit again and that he resumed training yesterday.

“We will see with which information and with which line-up we are going to play the game tomorrow.”

When asked if he knew of Ronaldo’s trip to Portugal ahead of the Man City game, the German answered: “No, because it doesn’t make sense to look back on what was happening in the last six or seven days.

“For me, it’s important what is happening today and tomorrow. For me, it doesn’t make sense at all to go through all this again.”

🗣 "I haven't asked him if he's happy at Manchester United."

Should Ronaldo start against Tottenham on Saturday? Let us know in the comments section.