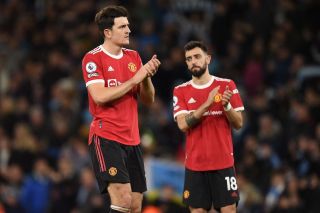 Manchester United will be looking to keep their top four hopes alive when they take on Tottenham Hotspur in the Premier League on Saturday night.

The Reds go into the game on the back of a bitterly disappointing 4-1 defeat to Manchester City last weekend, whilst the visitors ran out 5-0 winners over Everton on Monday night.

Cristiano Ronaldo remains a doubt to face Spurs with a hip injury, however, Raphael Varane is widely expected to return to the starting eleven having missed the Derby last weekend.

Already sitting outside the top four and with Arsenal having three games in hand, it’s no secret that United’s chances of finishing in the top four this season are now looking increasingly slim. Having dropped countless silly points this season at Old Trafford, United can’t afford to drop any more and in facing Spurs on Saturday night it provides the Reds with another mighty tough challenge.

Spurs only sit two points behind the Reds in the Premier League table and have two games in hand. Under Antonio Conte, Spurs have already beaten Manchester City last month, so Rangnick will be fully aware of just how dangerous the North London side can be.

Going forward with Harry Kane, Heung-Min Son and the likes, Spurs can cause you real problems and in order for United to take three points here they will have keep their attack at bay. We can’t afford to have a repeat of our second half performance we seen against City because if we do fold Spurs will make us pay.

United need to start winning games now and hope that the rest drop points. It’s a massive ask and it will be a real achievement if we do finish in the top four from here but anything is possible and you wouldn’t back against United to go on a winning run from now till the end of the season.

It wont be easy and I expect this one to have plenty of goals in but it’s a game which I do think United will win albeit it will be very close.