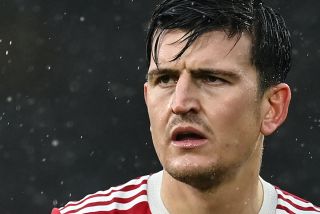 Manchester United captain Harry Maguire passed on his experience from playing in the FA Youth Cup at Sheffield United.

Maguire gave a speech to the Manchester United U18 side that defeated Wolves 3-0 on Wednesday night to reach the FA Youth Cup final.

Speaking about that, United’s head of academy, Nick Cox, told the Manchester Evening News: “Harry popped down to the dressing room before the game to speak to the boys.

“He approached us yesterday. Harry was watching Youth League games at Leigh Sports Village right in the early rounds at the beginning of the season.

“He’s got a keen interest, he watches youth team games, this isn’t a gimmick, something he’s done for tonight’s game. This is consistent with his behaviours but obviously, it catches the attention tonight.

“He approached us yesterday and said it is something he’d like to do. Travis and Harry have a relationship because they were part of the same Sheffield United group that came to Old Trafford in the Youth Cup in 2011, so that was something we welcomed.

“It was important for the boys to know they had support from across the club and the club captain, so it was nice he could pop in, say a few words, then sit back and watch the game with us in the directors’ box.

“I’m confident the boys would’ve been delighted to see Harry there in his usual reassuring and calm manner, sharing some words of experience. Of course, he’s played in big games here as a youth player, he played in a Youth Cup final, so it was nice he could share some of his experiences.”

Goals from Charlie McNeill and Alejandro Garnacho set up a final at the Theatre of Dreams against either Nottingham Forest or Chelsea. The U18s beat Scunthorpe United, Reading, Everton, Leicester City, and now Wolves to book their place in the final.

Maguire wasn’t the only first team member sat in the stands at Old Trafford during the week. So was second choice goalkeeper Dean Henderson, who came through the academy at United, and he is another player with an uncertain future.

Anyhow, it was great to see United progress to the final for the first time since 2011 – when they won the competition with players like Paul Pogba, Jesse Lingard and Ravel Morrison starring in the side.