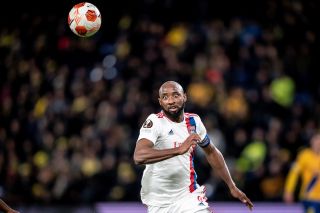 Manchester United have been linked with a move for Lyon striker Moussa Dembele this week.

The club reportedly had a scout watch the French striker in Lyon’s 1-0 win over FC Porto on Wednesday night in the Europa League. Dembele played a role in the game’s only goal, but now we are starting to learn more about United’s interest in the player.

According to the Manchester Evening News, the 25-year-old goalscorer would be signed as a replacement for Edinson Cavani — but he is also one of the many strikers being looked at right now.

Cavani, who is available this weekend to face Tottenham, is expected to leave Old Trafford once his contract expires at the end of the season. It remains to be seen where he will end up but there’s absolutely no talk over a new deal at United — he hasn’t played enough football this season to deserve one.

This means the Lyon striker would only be viewed as a squad player at United rather than a starting striker, which we expected after initially seeing the links because he doesn’t strike me as an alternative for Erling Haaland.

Dembele has 5 goals in his last 7 league games for Lyon.

Let us know if you think Dembele would be a good signing for United in the summer?