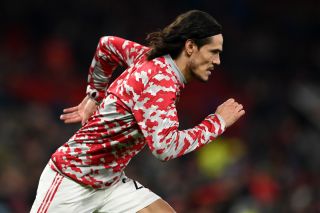 Manchester United striker Edinson Cavani has opened up about how frustrating it has been to spend so much time out injured this season.

The Uruguayan hasn’t played for United since the 1-1 draw at Burnley at the beginning of February, missing each of the six games we’ve played since then, but it sounds like he will be available tomorrow to face Tottenham Hotspur — a club he scored against in the reserve fixture.

Cavani turned 35 last month and it is clear that he is coming to the end of his career. Of course, there’s still a few years left in him yet but this is likely to be his final season at Old Trafford. There have been reports that Lyon striker Moussa Dembele could be signed as his replacement in the summer.

However, after suffering with a thigh issue, Cavani admits it has been difficult having to watch his team-mates, rather than playing alongside them in recent weeks.

“Yes, I’ve been unfortunate to be out through injury, and for a longer period than I’m used to,” Cavani told club media earlier this week (via ManUtd.com).

“I’ve never been used to spending this length of time on the sidelines. It’s something that I’m finding very difficult. Something which is very tough.

“Mentally, it’s not easy either, because when you’re not used to it, it really is extremely hard to take on board what is happening and seeing your team-mates each game going out on to the pitch, either for training or to play in a match.

“And you can’t be joining them out there, it’s hard to take, and it’s really frustrating that you’re feeling like that, and it makes you a bit anxious and really keen to be wanting to be fit and ready as quickly as possible.”

It must be the toughest time as a professional footballer – having to watch your team-mates play while injured, when you want to be part of the action.

Sadly, Cavani’s last season at the club has not gone as planned.