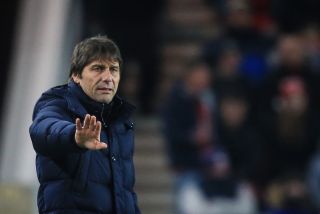 During a press conference on Thursday afternoon, Antonio Conte insisted once more he is enjoying his work at Tottenham Hotspur and explained why he never became Manchester United manager instead.

You could say that unlike United, Spurs saw Conte as a risk worth taking — and Saturday could prove whether they were right as both teams face off in a heated contest for top four.

Five months ago, with Ole Gunnar Solskjaer’s time in charge quickly coming to an end, United had a chance to give the job to Conte but he wasn’t seen as the right fit.

The Italian has already shown why, by being extremely confrontational during his time at Tottenham, which has put doubt in people’s mind over whether he will stay or look for a job elsewhere.

However, Conte has now reaffirmed his focus on his current club, when asked about his doubters from a United perspective.

“Honestly, I think that when United decided to sack Solskjaer, I signed for Tottenham,” Conte said, as quoted by the Manchester Evening News.

“I enjoyed to do this, because at that moment, I found this situation very good for me, to work in modern club with fantastic stadium and training ground, with a big task to try to build something important, to build something competitive for the future.

“The present is Tottenham, for me. I am enjoying a lot to work with this club, with these players. We are trying to improve, to raise our level; this is my target in this moment. I repeat: I am enjoying doing it.”

Conte also spoke about the Manchester derby last weekend and how he saw varying aspects come to light. He insisted there is no shame in losing to City, but try telling that to a United fan!

Should be an interesting game this Saturday 🤔 pic.twitter.com/WteUnCDU8Y

He added: “First of all, to play against Manchester City is not easy for every team. I consider City in this moment the best team in the world. They have the best coach in the world, fantastic players, they are working for many years together.

“To play against City, to get points against City, is not simple. For United, for Tottenham, for Liverpool, for Chelsea, for every team. I think I consider this a game apart.

“It was very difficult for Manchester United to continue to press high, to give pressure, to keep the same intensity of the first half. Then City exploited the characteristics of their players and they got three points.

“But I listened to what Pep said, ‘it was maybe the best game that we played’, when he was in City. He said this, that it was the best level that City reached with him in this game. It means that City played an outstanding game and United tried to do their best.

“But City for sure, I repeat, is a team that to play them is not simple.”