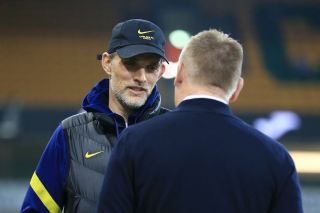 Jamie Carragher got a number of Manchester United fans excited on Thursday with his column on why the club should turn their attention to hire Chelsea manager Thomas Tuchel.

The former Liverpool defender turned pundit made a number of strong points in his argument, including one that the German is capable of challenging both Pep Guardiola and Jurgen Klopp for the biggest honours, which is exactly what Manchester United need to start doing.

Now Jason Burt, who also writes for The Telegraph, claims Tuchel has no intention of quitting Chelsea despite the club’s future being thrown into the air by the sanctions imposed on Roman Abramovich.

The former Borussia Dortmund and Paris Saint-Germain coach apparently “loves” working at Chelsea, but that could soon change when he finds out who the new owners are going to be, and how they want to run the club moving forward, if a sale is permitted by the UK government.

The report also stresses that even before the sanctions were announced this morning, up to six clubs had registered an interest in Tuchel, including Manchester United. It’s good to hear that we are in the running should anything happen because I would jump at the opportunity to hiring him in the summer.

Burt outlines that representatives have asked to be kept informed should anything change re: Tuchel’s future.

It sounds like United will continue working on appointing a manager without Tuchel, unless the unimaginable happens at this point, with our attention firmly on Erik ten Hag and Mauricio Pochettino.

Tuchel will be expected to comment on his future tonight as Chelsea take on Norwich City in the Premier League.