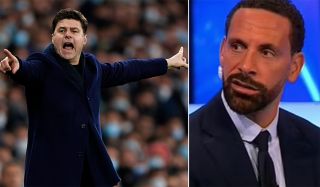 Rio Ferdinand defended Mauricio Pochettino last night and believes the Argentine is not to blame for Paris Saint-Germain’s latest exit from the Champions League.

An unbelievable 16-minute hat-trick from Karim Benzema gave Real Madrid the lead as they overturned a 1-0 deficit from the first leg to reach the last eight of the competition. Manchester United will hope to join them next week when play host to Atletico Madrid at Old Trafford in our last-16 second leg clash.

Last night’s 3-1 defeat saw PSG dump out of the Champions League in embarrassing fashion, but Pochettino will be hoping it doesn’t go against him in the summer or when Manchester United decide who will be their next manager.

The Argentine took the job in Paris back in 2021 with the aim of delivering their first ever Champions League title, though that won’t be happening this season and The Telegraph claim his future hangs by a thread amid interest from United.

PSG’s best finish in the competition came under Thomas Tuchel in 2020 when they reached the final and deservedly lost to Bayern Munich.

However, at a time some United fans appeared to pin the blame on Pochettino for PSG’s shortcomings, former centre-back Rio Ferdinand defended the Argentine against the French side’s recent record in Europe.

He was asked whether the criticism aimed at the potential next United manager was fair, before telling BT Sport: “I don’t think so given the history at PSG.

“Many managers have been there now and won the league and failed in the Champions League.

“We saw today how the team folded, and this isn’t just a one season episode, this is something that continually happens every single year where you go, ”do you know what, PSG with the talent they’ve got, especially in attacking areas, with the experience that they’ve got, an array of international big players they’ve got, they’re gonna have a chance of winning it’’.

“And they fall at the quarter-final, semi-final hurdles, they’ve lost in the final. This is something that just happens. [It is a] dysfunctional team, I think that sums it up quite well about the way that they play.

“So I don’t think you can really point the finger too much at Pochettino when this has happened season after season.”

Is PSG's form in the Champions League over the years a player or manager issue? 🤔@rioferdy5 & Michael Owen have their say…#UCLTONIGHT pic.twitter.com/UQBlnwNoJB

While the result still reflects poorly on Pochettino, Ferdinand makes a valid point when you consider Real Madrid’s record in the Champions League and the fact Wednesday night’s encounter was played at the Bernabeu.

I’m not making excuses for Pochettino but I don’t think the United hierarchy will be put off by the fact PSG were knocked out of the Champions League by Real Madrid, a team on the rise under a brilliant manager in Carlo Ancelotti, who has been reportedly recommended for the United job by Sir Alex Ferguson.

Still, Gary Neville recently gave his view that Erik ten Hag could easily be the frontrunner for the job.

It should be interesting to see what whispers come from Pochettino’s camp in the coming days.