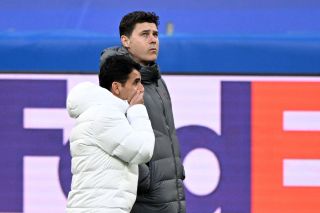 Whether Mauricio Pochettino is the right man to lead Manchester United to success is up for debate, but it sounds like his days are numbered at Paris Saint-Germain after crashing out of the Champions League.

The Argentine is one of the leading contenders to take over at Old Trafford in the summer, along with Ajax head coach Erik ten Hag, while Chelsea’s Thomas Tuchel has been linked following sanctions imposed on club owner Roman Abramovich.

According to Chris Wheeler of the Daily Mail, Pochettino would need to feel that he is top of United’s list of candidates before committing himself to the club, with the same report stressing that PSG owner Nasser Al-Khelaifi is ready to sack the 50-year-old following Wednesday’s capitulation in the Champions League.

It feels like Pochettino has been linked with the United job since Jose Mourinho was sacked, and one would think that if he doesn’t get the job now he never will. That would sit perfectly fine with United supporters who want rather see Ten Hag appointed in the summer.

Wheeler states in his article that Ajax will not stand in the Dutchman’s way if he is offered the role, which is encouraging to hear following reports that he is “very keen” to talk to United.

United take on Tottenham in the Premier League as they continue their hunt for a Champions League spot.

All of the managers mentioned in this piece may be keeping an eye on the result as it may wake them up to the prospect of Europa League football next season.