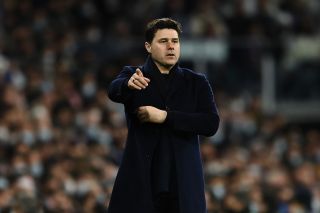 Mauricio Pochettino’s future at Paris Saint-Germain is hanging by a thread.

That’s according to The Telegraph as Jason Burt claims that PSG’s exit from the Champions League could lead to Pochettino’s seeking the Manchester United job.

Real Madrid’s Karim Benzema scored a 16-minute hat-trick in the second half and PSG couldn’t respond — not even with Lionel Messi, Kylian Mbappe and Neymar on the pitch.

It was another embarrassing blow in Europe’s most prestigious competition for the French giants.

A lot of media outlets seem to think this could accelerate Pochettino’s move to United, but where does that leave fellow contender for the job Erik ten Hag? The Ajax coach is a popular choice among fans and could lead his side further in Europe this season.

This, of course, will be seen as a potential boost in United’s search for a new manager because PSG’s Champions League exit is likely to give the club a clear run at appointing the Argentine this summer, if that is the decision made by John Murtough and Richard Arnold…

The Telegraph warns that there will be demands within French media for him to go immediately but can PSG quickly replace him with Zinedine Zidane? That seems to be the big question in Paris whenever Pochettino is discussed.

Pochettino will hope he can finish the season in Paris because they’re currently 13 points clear in the French title race. Failing to win Ligue 1 this season would see the Argentine painted as a failure at PSG, but it still might not save him from the axe.

Let us know if you think United should still move for Pochettino in the summer?