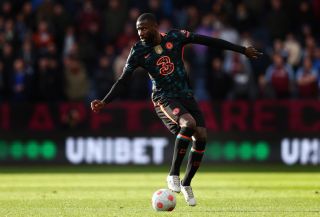 Chelsea defender Antonio Rudiger is one of the many footballers linked with a summer move to Manchester United.

The Reds desperately need to bolster their defence and it remains to be seen if there will be a starting place for Harry Maguire after an awful season full of calamities.

Although Raphael Varane has been part of a shoddy defence, and has made mistakes from time to time, the Frenchman’s quality is clear whenever he starts at the back.

And I can’t say I’ve ever been convinced by Victor Lindelof.

You look at the teams we are looking to compete with in England, their solid defences, and it’s clear that we lack speed at the back in order to play a high line. Lindelof would be lucky to get into any of those teams.

While I’m not saying Rudiger is the answer, the German centre-back is exactly the type of defender we should be targeting in the summer. At least he’d be a consistent presence at the back and we’ve not had that for a long time.

According to 90min, United hold ‘firm interest’ in Rudiger as a free agent but the club’s managerial uncertainty could lead the defender to look elsewhere. Interim manager Ralf Rangnick is expected to move upstairs into a advisory role at the end of the season.

However, with time ticking on his current deal and Chelsea being blocked from extending any player contracts, Caught Offside understands the Blues are preparing to bid farewell to the 29-year-old, who is a fan-favourite at Stamford Bridge.

The report adds that Rudiger has not yet reached an agreement with any club, but he will have a range of offers from Europe’s top clubs at the end of the season. It is noted that Bayern Munich have expressed the most interest thus far but he is waiting to see how much PSG are willing to offer.

Chelsea are on the verge of losing one of the most consistent centre-backs in the league.