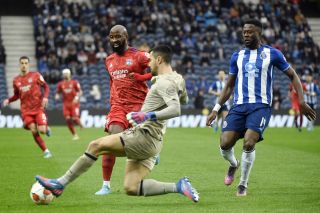 Manchester United are believed to have sent a scout to watch Lyon vs FC Porto last night.

According to the Daily Mail, the Reds are keeping an eye on Lyon striker Moussa Dembele as a possible transfer target as they look to shake up their attack this summer under new management.

Of course, it will depend on who the next manager wants up front and he will have Cristiano Ronaldo for at least one season, unless the Portuguese star decides to leave in the summer.

MailOnline understands United were represented at Lyon’s Europa League last-16 clash at Porto on Wednesday night, where Dembele created the only goal for Lucas Paqueta, with some help from VAR.

Jonathan Shrager, who is known for providing accurate updates on all things United, posted the same information on Twitter. He tweeted: “Manchester United have recently made informal enquiries about Moussa Dembele’s contractual situation and intentions. A club scout was at Lyon’s Europe League game in Porto yesterday, in which Moussa assisted Lyon’s first leg winner. He is a player whom United previously monitored.”

Manchester United have recently made informal enquiries about Moussa Dembélé’s contractual situation and intentions. A club scout was at Lyon’s Europa League game in Porto yesterday, in which Moussa assisted Lyon’s first leg winner. He is a player whom United previously monitored

Marcus Rashford’s future suddenly looks uncertain and his form has been a worry since returning from a shoulder operation earlier this season, but it remains to be seen if the England star will be part of the new manager’s plans.

Dembele has been on United’s radar for some time, so my guess is that they already know a lot about him from his time at Fulham, though it’s been four years since he left Celtic for Lyon.

The report states that the French striker may be available for £25m this summer if Lyon decide to cash in before his contract expires.