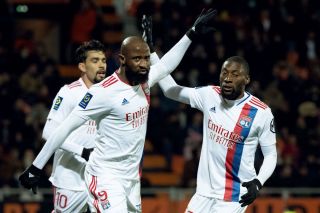 Manchester United could turn their attention to Lyon striker Moussa Dembele as they look to strengthen their attack in the summer.

That is according to the Daily Mail as United begin to look at the market to evaluate the best attacking players they can get when the transfer window opens.

We can expect a lot of changes to the squad this summer with several players leaving, including Edinson Cavani and Jesse Lingard, so it makes sense for United to have a look at attacking options in the transfer market.

Marcus Rashford’s future looks uncertain as he approaches the final year of his contract, while Cristiano Ronaldo shouldn’t be seen as a long-term option and Anthony Martial will be contemplating his exit. The next manager needs to make sure he’s got players who want to be at Old Trafford rather than throwing the towel in whenever the going gets tough, like some of the current crop.

Dembele broke onto the scene at Fulham before joining Celtic in 2016 — two years before he left for Lyon — and the Frenchman could now be set to join one of the biggest clubs in the world.

The striker’s current deal expires in 2023, meaning Lyon risk losing him as a free agent if they don’t cash in or cannot agree new terms with the player.

He could follow former United winger Memphis Depay by leaving Lyon on a free transfer, with the Netherlands international making a surprise move to Barcelona last summer. It goes without saying that he has been unable to fill Lionel Messi’s shoes at Camp Nou…

Howeever, Lyon won’t want to experience the same type of episode with Dembele and that could see the Ligue 1 side transfer list him for as little as £25 million in the coming months.

Dembele has nine goals in 19 league games this season, which tells me he could come in to compete for a place in the the team, although he’s a lot more likely to fall into the category of a squad player at the level United want to be at.