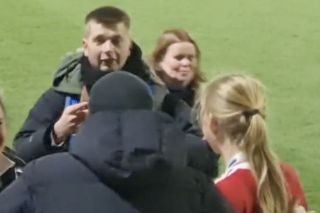 Ole Gunnar Solskjaer was a proud father on Wednesday night as he watched his daughter Karna lift the Women’s Super League Academy Cup.

Krana Solskjaer, who plays for the Women’s U21s side, helped United beat Birmingham City 4-1 in the final.

The teenager started the match and played just over 60 minutes with her father in the crowd. She was replaced by Keira Barry just after the hour mark.

However, Karna got her first taste of first team football in January after impressing the youth team coaches, and she will surely set her sights on playing more after winning a trophy with the club.

Former United player and manager Ole Gunnar Solskjaer posted for photographs with Karna after the match near the touchline.

Proud moment for Ole, a father watching his daughter lift a trophy.

The Norwegian has kept a low profile since his Old Trafford dismissal in November, but the first team has not seen the bounce many expected following Ralf Rangnick’s arrival.

This gives us another reason to believe Ole wasn’t the biggest problem at the club.

We hope he is enjoying his time away from football.