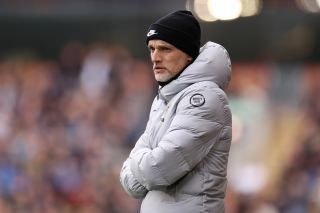 I can’t quite believe it, but Jamie Carragher has actually given sound advice to Manchester United by suggesting Thomas Tuchel should be their main target for the managerial role at Old Trafford.

Roman Abramovich was named as one of the Russian oligarchs sanctioned by the UK government this morning, which leaves Chelsea Football Club in disarray.

As the government steps up its efforts against a number of Russian oligarchs, amid Russia’s aggressive invasion of Ukraine, Culture Secretary Nadine Dorries confirmed that Abramovich’s assets had been frozen.

1/ 4🧵Putin’s attack on Ukraine continues & we are witnessing new levels of evil by the hour. Today the Government has announced further sanctions against individuals linked to the Russian Government. This list includes Roman Abramovich, the owner of Chelsea Football Club.

On top of that, Abramovich cannot sell the club as planned. He will be deprived of any profits and Chelsea have also been banned from selling match tickets or signing new players moving forward.

And, to make matters worse for Chelsea fans, a number of key first team players are set to leave the club the summer due to contractural issues. An experienced trio of Cesar Azpilicueta, Antonio Rudiger and Andreas Christensen could all leave the club with their deals set to expire.

The club is also unable to tie any of their players down to new contracts, as per MailOnline, though it is understood that they will be paid in full, alongside all staff members.

This could put Thomas Tuchel’s future in the air. The German coach won’t be happy if Chelsea are blocked from making transfers in the summer. I mean, how can he plan for the future or continue his efforts to catch Pep Guardiola’s Man City in the Premier League?

Well, Manchester United need a manager and Jamie Carragher has put the two together for his latest column (via Telegraph).

In the second paragraph, Carragher jumps in with the recommendation for Tuchel, writing: “Given the events at Chelsea, United’s decision to wait until the end of the season presents them with a choice no-one could have foreseen. One of the best managers in the world — the current Fifa coach of the year — must be top of their list.”

Carragher adds that it would be too good of an opportunity for Tuchel to turn down because of the mess Chelsea find themselves in, so it will be interesting to see if he sticks around until someone else buys the club.

It could also be argued that Tuchel did a far better job at PSG than Mauricio Pochettino, who, along with Ajax coach Erik ten Hag, is currently among the front runners for the job at Old Trafford.

Let us know in the comments if you want United to turn their attention to Tuchel?